I was headed out to the library yesterday when my oldest son said, “Oh yeah. I’ve been wanting to read some books by Chesterton, Dante and Shakespeare. Will you see if you can find me some at the library?”

Uh, I don’t even know where they keep books like that at the library. I told him I would ask a librarian to help me find them. He was happy.

I haven’t pushed him to read the Classics. I haven’t forced him to read anything. He hasn’t had a Literature course, as such. He just knows from other things that he has read that he will gain something from reading works by these great thinkers.

I searched the library catalog while I was there. They didn’t have books by any of those guys at our branch! But I found a book I could reserve called “G. K. Chesterton on Shakespeare”. Ah ha, that should be interesting. To Shawn, at least. I don’t know if I could handle such intense and lofty thinking myself, but I’m confident that he can. I also reserved a book of ten of Shakespeare’s plays.

A few quotes by G. K. Chesterton from here:

Fallacies do not cease to be fallacies because they become fashions.

The Bible tells us to love our neighbors, and also to love our enemies; probably because they are generally the same people.

I have a feeling I’ll be hearing some interesting quotes and ideas as Shawn reads some of Chesterton’s works.

Speaking of which, the Charlotte Mason method works. Shawn has been fed a diet of living books all his life. It’s only natural that he should be hungry for the great thoughts of the great thinkers throughout history. Hence, the title of my post, “I Tell You, It Works!”

And the Holy Spirit can be depended upon to lead them into what they need to know and how they need to study.

This post is included in the Charlotte Mason Carnival here. 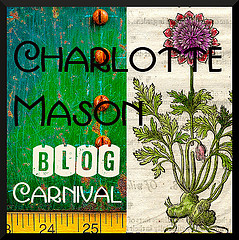