That’s what we’ve been doing for a week now.  We’re trying to get movers to move our stuff for us… 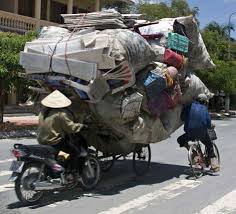 but I hope we find somebody better than this!

We have to leave here tomorrow in order to get Gary to his job on time Monday in Pennsylvania. They originally told him to report at 2:45 PM because he was going to be working second shift.  But he just found out that they have moved him to first shift!  He’s happier with those hours.  But now he has to report earlier on Monday.  And we have to take the rental car back before he goes to work!  That’s going to be an early morning for us, especially since we’ll be losing an hour going east.  We’ll be on Eastern time again.  I enjoyed being on Central time for the last several years, but I guess that time is over for us.

It’s a good thing we had most of my books and some other things packed already!  Shawn and Anna packed a lot a couple of months ago because we thought we were moving then.  I’ve had to make do without some things during that time, but now I’m glad they did it.

We have to rent a car to get all of us from here to there.  So we have to go get that in the morning.  I’ve got appointments to see two houses Sunday, and I’m in contact with several people about other houses.  A couple of them are farmhouses in the country with land!  We should be able to get something in the country this time, Lord willing!  I’m really praying for that.

Whatever happens, we know that God is in control.  We keep coming up  against obstacles, but He keeps helping us to get around them.  He gives us ideas and plans that we know we would never have come up with on our own.  We are so grateful for His abundance of provision and wisdom and favor that He is pouring out on us.

This is NOT how our Christmas will be!  We will be in a big, beautiful house in plenty of time to celebrate Christmas the way we love it.  I decree it in Jesus’ name!  Hallelujah!